The Harmful Effects of Smoking on Our Health 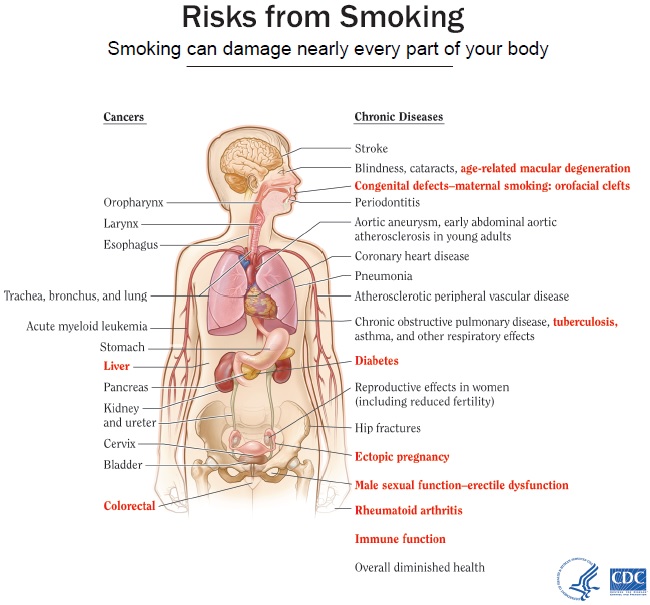 Smoking and Increased Health Risks
Smokers are more likely than nonsmokers to develop heart disease, stroke, and lung cancer.
·         Estimates show smoking increases the risk:
o    For coronary heart disease by 2 to 4 times
o    For stroke by 2 to 4 times
o    Of men developing lung cancer by 25 times
o    Of women developing lung cancer by 25.7 times
·         Smoking causes diminished overall health, increased absenteeism from work, and increased health care utilization and cost.
Smoking and Cardiovascular Disease
Smokers are at greater risk for diseases that affect the heart and blood vessels (cardiovascular disease).
·         Smoking causes stroke and coronary heart disease, which are among the leading causes of death in the United States.
·         Even people who smoke fewer than five cigarettes a day can have early signs of cardiovascular disease.
·         Smoking damages blood vessels and can make them thicken and grow narrower. This makes your heart beat faster and your blood pressure go up. Clots can also form.
·         A stroke occurs when:
o    A clot blocks the blood flow to part of your brain;
o    A blood vessel in or around your brain bursts.
·         Blockages caused by smoking can also reduce blood flow to your legs and skin.
Smoking and Respiratory Disease
Smoking can cause lung disease by damaging your airways and the small air sacs (alveoli) found in your lungs.


Smoking and Cancer
Smoking can cause cancer almost anywhere in your body: (See figure above)
·         Bladder
·         Blood (acute myeloid leukemia)
·         Cervix
·         Colon and rectum (colorectal)
·         Esophagus
·         Kidney and ureter
·         Larynx
·         Liver
·         Oropharynx (includes parts of the throat, tongue, soft palate, and the tonsils)
·         Pancreas
·         Stomach
·         Trachea, bronchus, and lung
Smoking also increases the risk of dying from cancer and other diseases in cancer patients and survivors.
If nobody smoked, one of every three cancer deaths in the United States would not happen.
Smoking and Other Health Risks
Smoking harms nearly every organ of the body and affects a person’s overall health.
·         Smoking can make it harder for a woman to become pregnant. It can also affect her baby’s health before and after birth. Smoking increases risks for:
o    Preterm (early) delivery
o    Stillbirth (death of the baby before birth)
o    Low birth weight
o    Sudden infant death syndrome (known as SIDS or crib death)
o    Ectopic pregnancy
o    Orofacial clefts in infants
·         Smoking can also affect men’s sperm, which can reduce fertility and also increase risks for birth defects and miscarriage.
·         Smoking can affect bone health.
o    Women past childbearing years who smoke have weaker bones than women who never smoked. They are also at greater risk for broken bones.
·         Smoking affects the health of your teeth and gums and can cause tooth loss.
·         Smoking can increase your risk for cataracts (clouding of the eye’s lens that makes it hard for you to see). It can also cause age-related macular degeneration (AMD). AMD is damage to a small spot near the center of the retina, the part of the eye needed for central vision.
·         Smoking is a cause of type 2 diabetes mellitus and can make it harder to control. The risk of developing diabetes is 30–40% higher for active smokers than nonsmokers.
·         Smoking causes general adverse effects on the body, including inflammation and decreased immune function.
·         Smoking is a cause of rheumatoid arthritis.
Quitting and Reduced Risks
·         Quitting smoking cuts cardiovascular risks. Just 1 year after quitting smoking, your risk for a heart attack drops sharply.
·         Within 2 to 5 years after quitting smoking, your risk for stroke may reduce to about that of a nonsmoker’s.
·         If you quit smoking, your risks for cancers of the mouth, throat, esophagus, and bladder drop by half within 5 years.
·         Ten years after you quit smoking, your risk for dying from lung cancer drops by half.
By. https://www.cdc.gov/
Share on Facebook
Share on Twitter
Share on Google+
Tags : Healthy Environment, Healthy immunity, Healthy living, Healthy personality

Related : The Harmful Effects of Smoking on Our Health